In the Year of the Gamer: 3rd Quarter Board Games Update

It's that time again: time to review my board gaming for the past three months. But first, my new pride and joy: my games on their new Kallax shelf in their new home. It makes me happy every time I look at it. (The second picture is the shelves on the bottom left pulled out.) 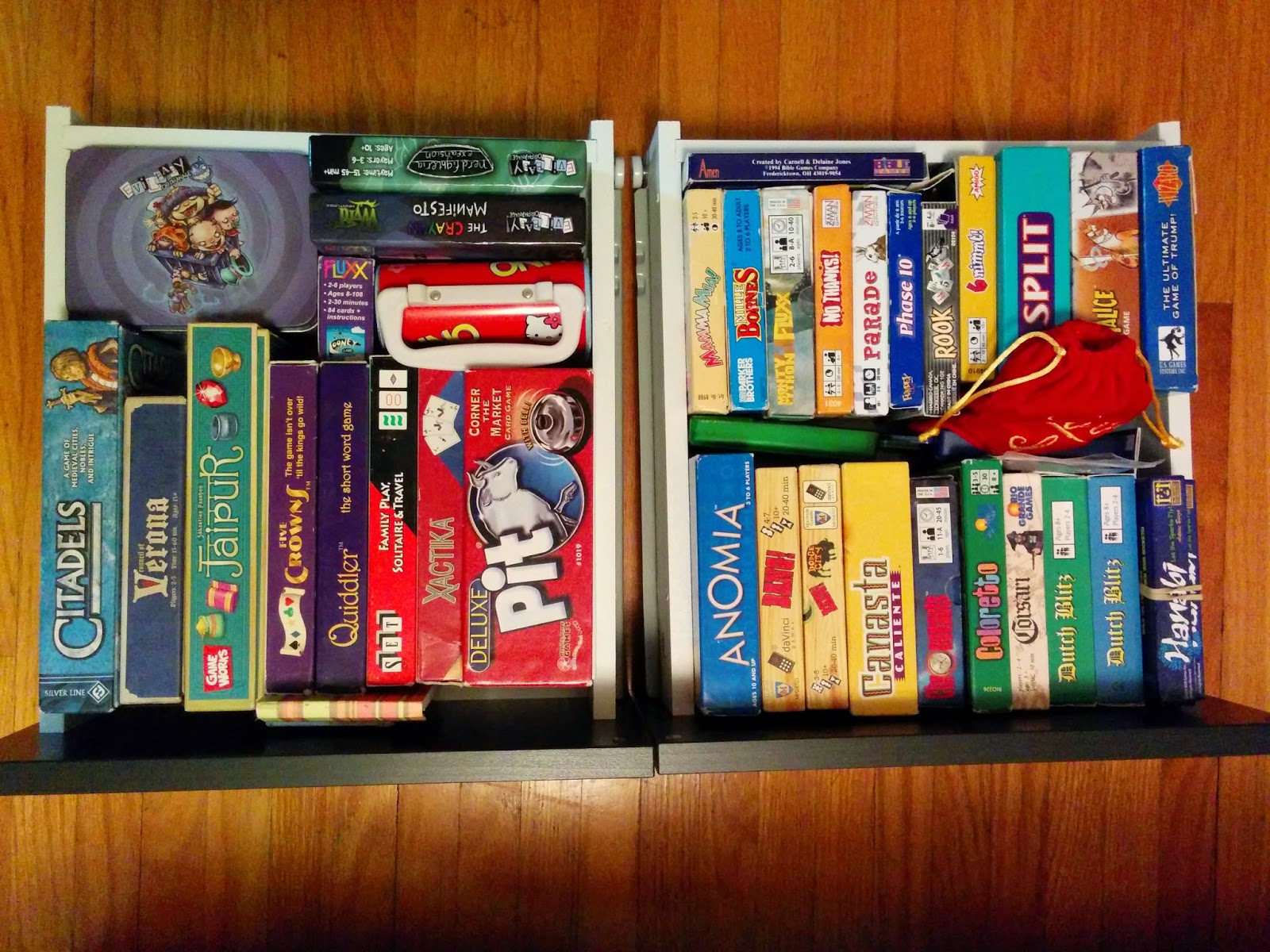 
After a decently busy July and August (21 and 22 plays respectively), September dropped off the map with my lowest month of plays since November 2011 and my only month in single digits since then other than September 2013. I hope it's not the beginning of a trend. I still managed to play 7 new games; I do, however, now own several games that I haven't yet played, so I need to start working through the backlog.

Games to Play and upcoming games


As you might imagine, my list of games to play has ballooned a bit again with not playing as many new games, but I think that it will sort itself out over the next few months. I've decided not to add new games to my "Top 20 to Play" until the new year, but I'm hoping to get the list down to ten from the original list and to try at least ten new games this quarter. That means I'll need to make some good new gaming friends soon!

Changes to my collection


I had a lot of changes to my collection in the third quarter thanks to the big move to the prairies. I got rid of a number of games - mostly of the party variety - but also including Power Grid and Dominion (I just didn't play them enough to keep them, and they're common enough that I'll still get to play them when I want to). I received a large number of games from Kickstarter (3 big boxes, 3 microgames, and 1 other game, to be exact) in addition to some solid pick-ups in the new city and a couple of parting gifts. I haven't thrifted much lately, but I still haven't even played most of what I've picked up in the past two months.

Updates to my board game goals for 2014

2. Nickel and dime my collection: I'm at only 11 out of 99 with at least five plays this year. Time to pick up the pace.

3. Clear out 10 games from my collection: I did that in the third quarter alone, again. I think I've cleared out 40 for the year, so this is still accomplished.

4. Add a dozen quality games to my collection: I was already at 8, and I count 7 solid additions for the third quarter, with three or four more KS orders coming in before the end of the year. Check.

7. Blog more about board games: I thought of posts to write, but they didn't happen. Sigh.

8. Design a game: This is the biggie that I actually accomplished! It's still in prototype playtesting, but it works, and I'm hoping to work more on it in the next few months.

Well, that's it for my board game self-evaluation until year's end. I'm hoping for a great final three months of gaming, so just come on over and we'll pull something off the shelf if you're in the Regina area.
Posted by Life of Turner No comments: