I have had a lot of fun in the past few weeks with my new Wii U. I had been eyeing up buying a Wii U since its release just over a year ago, but I had not figured out how to afford one until I started doing some scheming after Christmas. I had some Christmas and birthday money to use, so I was starting to do some calculations about trading in some old games and using the profits to supplement my cash outlay on the system. But then, as I researched on Pricecharting.com (an indispensable tool for video game collectors), I began to realize that I could probably fund the entire system - and then some - simply by trading in games. So I started doing some sorting and scheming, and soon I realized that I could easily part with a number of items, including a Sega Master System with nine games (all in the case) and the most valuable game in my collection, a complete-in-box copy of Earthbound for the SNES. 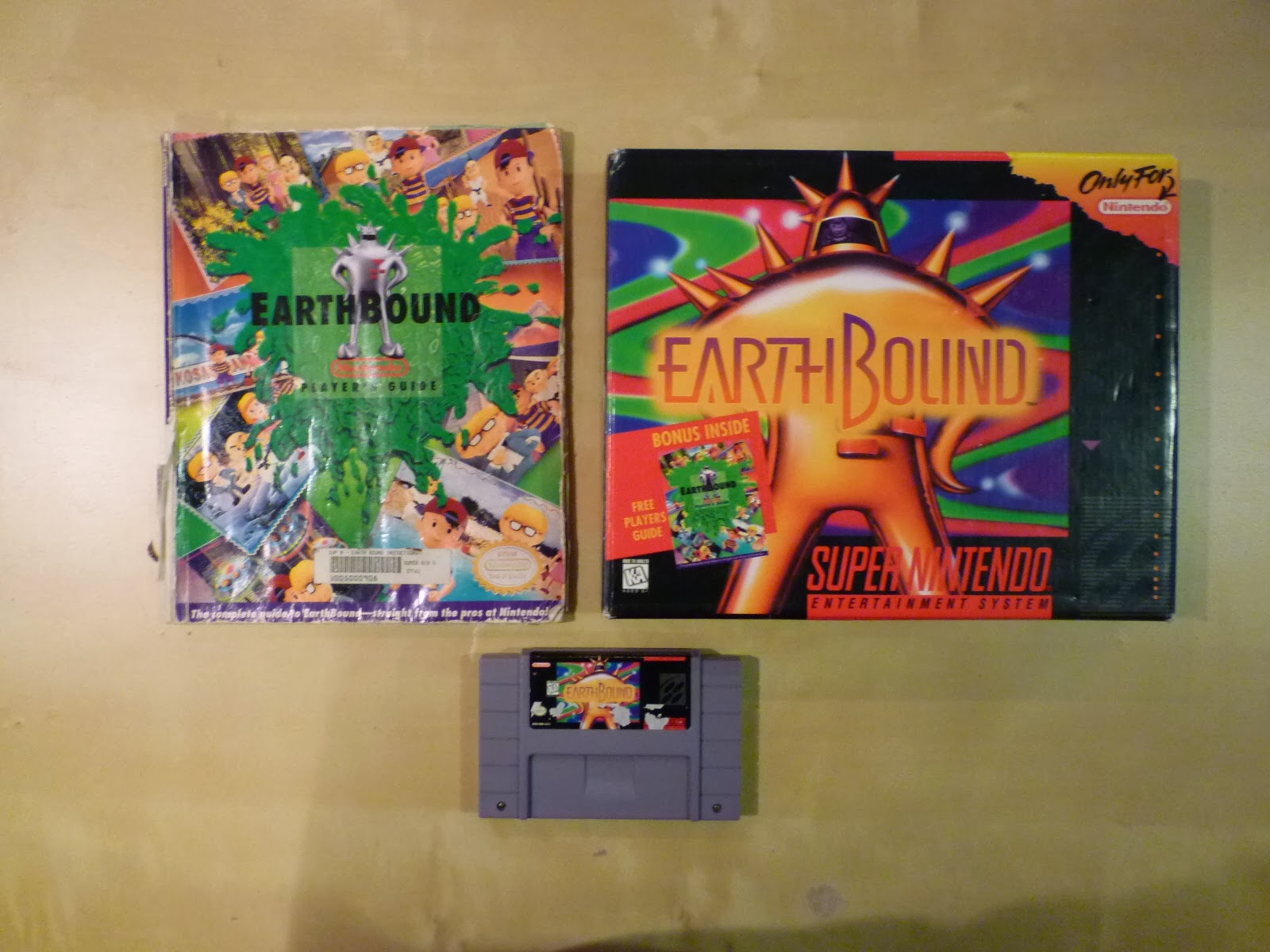 Earthbound has been trending up for years, but it has jumped even more lately; when I traded it in, it was worth $382 on VGPC. I figured it was time to finally part ways with the game, as I have owned it for over a decade and I have played it for a couple of hours total in that time. Plus, it was recently released on the Nintendo eShop for $10, so I could easily play it anytime I want to. I received close to $250 in trade just for the one game, which I figured was easier than trying to sell it (it did have a torn label and the manual was in not great condition), so I was able, in essence to trade one game straight up and get a Wii U. I have since been able to trade in and sell a number of other games, so I have amassed a small collection of brand new games at no cost. 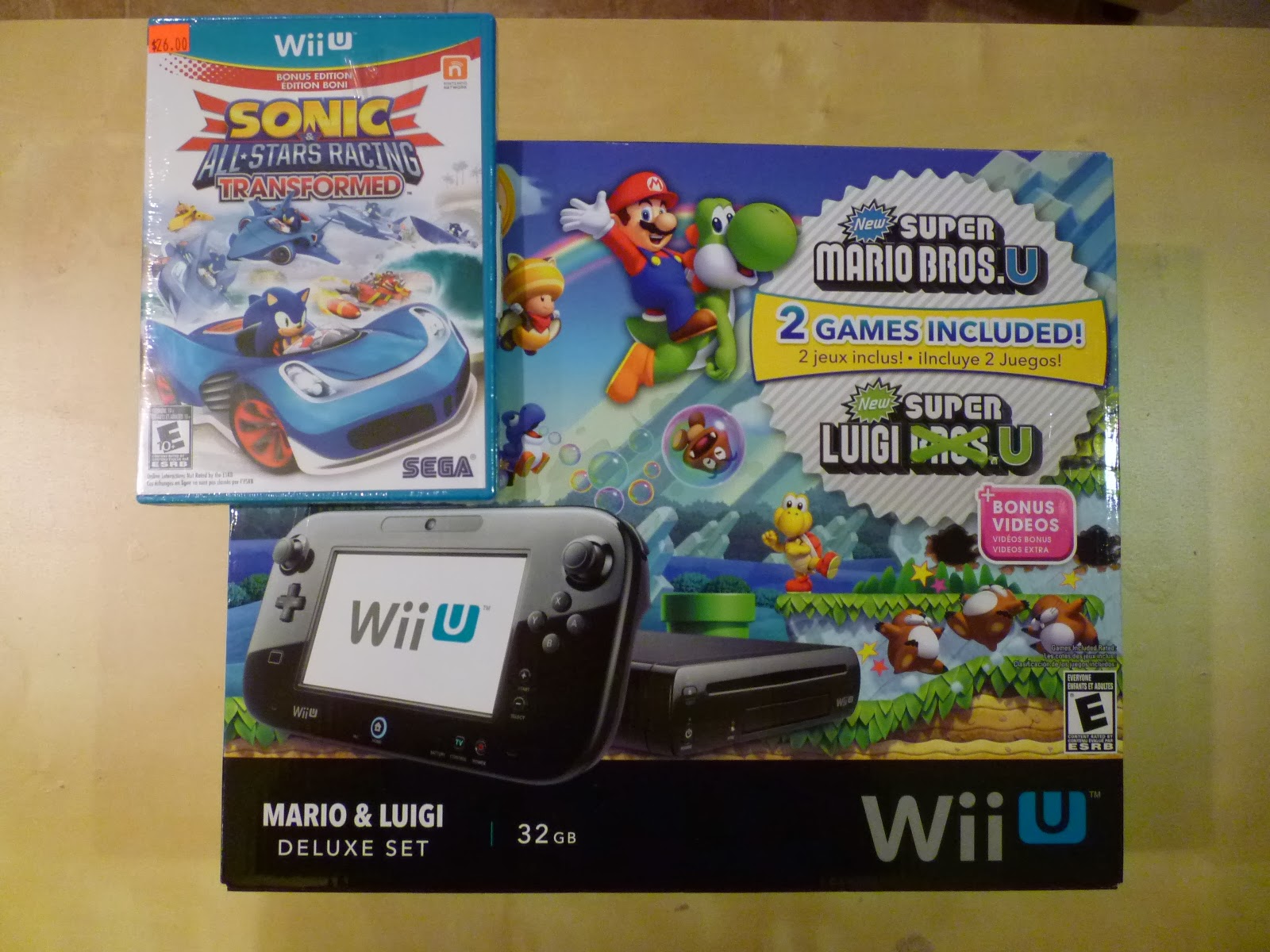 This Wii U purchase is the first time ever that I have bought a console this early in its life, near the beginning of the peak of the console. In the past, I have waited for significant price drops, and the soonest I have owned a console was 2.5 years into its life (about halfway in video game console terms). My Nintendo was a hand-me-down from a friend of my dad’s; I still have it and it still works! The first time I bought my own console was in early December 1994, when my sister and I pooled our money to buy a Super Nintendo for $110 from Superstore. I remember getting a Game Boy for my elementary school “graduation” in 1996, and then I finally bought a Nintendo 64 on my own in December 1998 on Boxing Day using the profits from my first job. I bought a Gamecube used at the end of the console’s life, and the Wii used halfway through its time, as well as a Nintendo DS well into its life, but I have always been catching up. I am excited to finally be on the cutting edge of a video game generation.


Of course, that does not answer the question that many of you might now be asking, which is: why would I buy a Wii U? There are, after all, more powerful and high-profile game systems out there (PS4,  XBox One), and the Wii U has been maligned in its first year and a bit. I really don't think that the criticisms leveled toward the Wii U are fair, as the system is really quite impressive technically. The games look great in HD, the control is intuitive and innovative, and Nintendo is still doing great things with their old standbys. Sure, it's no PS4 or Xbox One, but it's not trying to be. With that in mind, there are several reasons I picked the Wii U.

1. I am a fan of Nintendo games and franchises going back 25 years. From the early years of Mario, Zelda, Metroid through the many incarnations since, I just really enjoy how Nintendo develops their franchises. I'm still waiting for that new Metroid, a new StarFox, and even a new Star Tropics (not holding my breath for that one), and it does not even really matter to me that there are not new franchises, since there is still lots of life left in the old ones (though the "New Super Mario Bros." branch does seem to be running a little thin…).

2. The style of games suits me as a gamer in this phase of life. Nintendo games tend to be more casual and more oriented toward retro gamers, both of which are good for me. I never really enjoyed first-person shooters, role-playing games, or fighting games, so the relative lack of those styles of games on Nintendo systems does not bother me. I do not have the time or energy for games that require intense input of time and effort, and Nintendo does not really require that with their current games. Most gamers see this as a detriment, but I see it as a bonus.

3. The Wii U meets the social aspect of gaming for me, especially with the person with whom I play the most: my wife. She tends to enjoy the kinds of games that are available for Nintendo systems, and we have fun playing them together. We have already enjoyed a lot of Nintendo Land, and I'm sure that there is a lot more fun to come. I also really enjoy the asymmetric gameplay provided by the GamePad, and I think the Wii U is the best social console.

4. The pace of releases fits my gaming habits right now. Some gamers complain that there are not enough releases, but I find that the current schedule of a big Nintendo release every few months is more than enough to meet my needs. I probably game about five hours per week, so a title that provides thirty hours of play will last me a month or more.

So, then, the question is why I picked now to get in on the Wii U craze. Part of it is the fact that my game collection has increased in value to the point that I could fund it entirely through trades, but also that I am now willing to part with items that once I would not have allowed to leave. My focus in collecting is changing much more, and I am actively continuing to trade items from my collection that I will not likely play. So

But the other piece is that I think this is the perfect time to get into the Wii U. I waited for a year until there was a sufficiently large library to enjoy, and I already have six games to play through: three initial launch titles (Nintendo Land, New Super Mario Bros. U and New Super Luigi U, and Sonic & All-Stars Racing Transformed); and three other high profile releases, The Legend of Zelda: The Wind Waker HD, the arguable "killer app" of the console, Super Mario 3D World, and Donkey Kong Country: Tropical Freeze (including playing as Cranky Kong!). 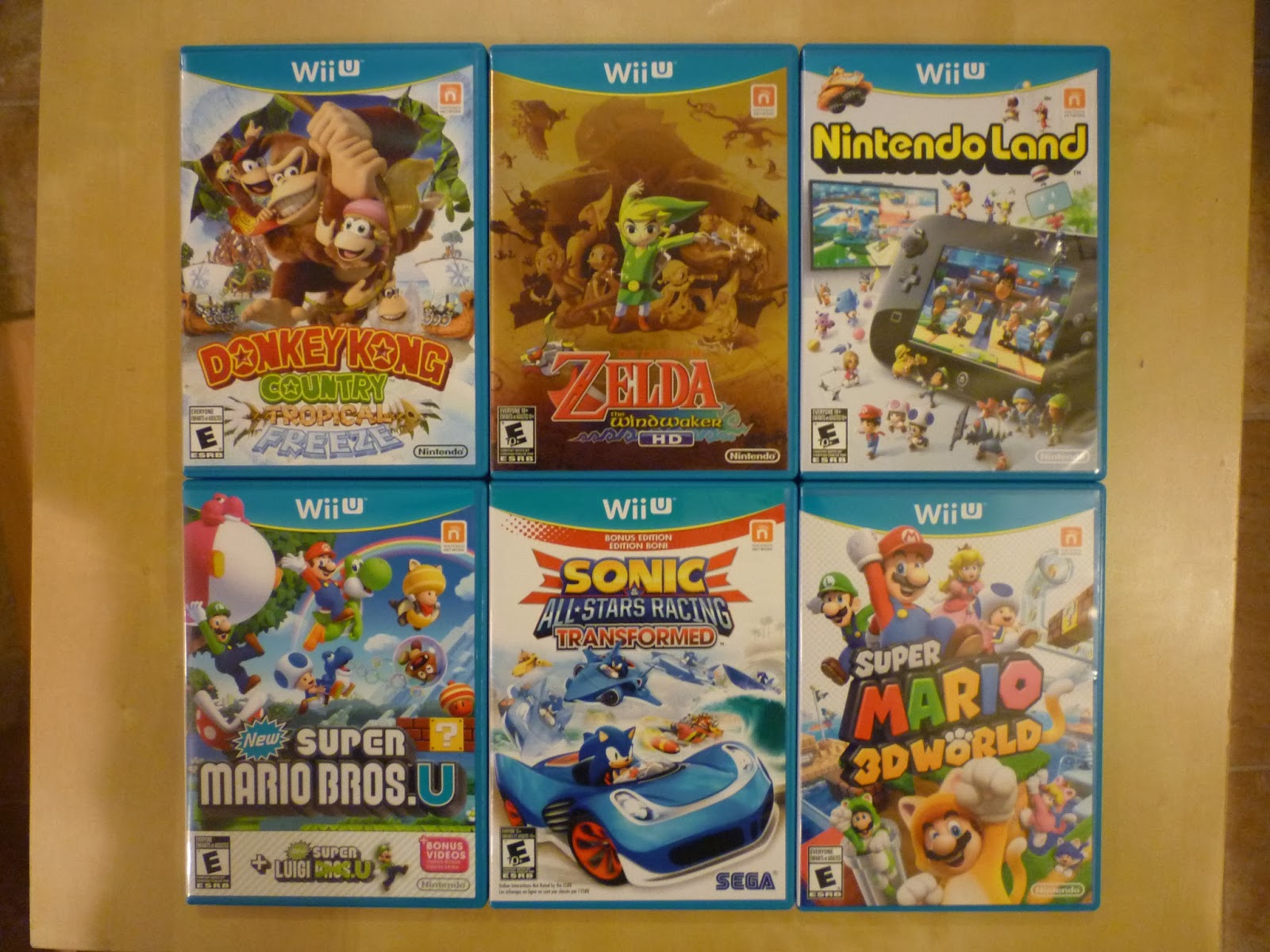 There are several other titles I am excited to play, including (in no particular order): Pikmin 3, Lego City Undercover, The Wonderful 101, and Lego Marvel Super Heroes. That's ten games right there, not including the eShop downloads of Earthbound, Wii Fit U, and NES Remix, which brings new challenges to classic games. There is more than enough of a library to keep me entertained for a while, and the next few months will bring even more goodies. Mario Kart 8 releases May 30, and it features the Koopalings as playable drivers. Yarn Yoshi, the spiritual sequel to Kirby's Epic Yarn and Yoshi's Story, will come out in the fall, and a fighting game called Hyrule Warriors set in the Zelda universe has also been announced for this year. Then there's a little game called Super Smash Bros. Wii U that you may have heard of that will be out this fall… Factor in the fact that new Zelda, Metroid, and StarFox games are rumoured for 2015, and it looks like I will be set for the next couple of years of gaming.

The bottom line is that I am excited about video games for the first time in a few years, actually. I have (perhaps surprisingly) not played many video games in the past couple of years, and I am excited about getting back into the hobby as a player and not just as a collector. I am excited to connect with friends and to use the social aspects of the Wii U. And I am really excited to just enjoy the sheer pleasure of playing games that are fun. So if you don't hear from me for awhile, just check in on the Miiverse - you might find me there.
Posted by Life of Turner