Thursday, August 30, 8:15 am. First class of the day. The room was bright - almost too bright. Slightly before the first bell, the grade nine students started to come: they came close to the door, looked at the room number, and then looked at me for affirmation to make sure they were actually in the right place. As soon as I smiled at them, they knew instantly - this is where they were supposed to be. I was not quite sure how the class would go, but neither were they. It was the first experience of school for all of us, and it felt like that first step onto a stair that is not possible to see, even if you have taken other stairs before. We stumbled a bit and fumbled to find our way, but we could finally put our feet down with confidence and continue on our journey. We got through. And by the end of fifth period, it was old hat for all of us. That was the first day of school.
Posted by Life of Turner 1 comment:

Email ThisBlogThis!Share to TwitterShare to FacebookShare to Pinterest
Labels: Teaching

I have been a fan of Collective Soul since their first album in 1994, and I had yet to be disappointed by a new CS record. Until today. But let's begin with some background...When Collective Soul released their album Youth in 2004, I was concerned because the band had lost their lead guitarist and their record label, and was independently distributing the album. It turned out that I did not have as much to worry about as I had thought: the album contained several very good singles that sounded even better in concert. CS followed up that album with two very interesting and successful projects: a stripped-down acoustic EP called From The Ground Up, which contained songs from Youth and a few other favourites; and a CD/DVD release entitled Home, in which they performed concerts with the Atlanta Youth Symphony Orchestra. These albums seemed to show a rejuvenation of the band, though I still awaited the next album to see whether the band could become relevant once again, or whether they would descend into bar-rock mediocrity. That wait ended today with the release of Afterwords, an unfortunately mediocre and predictable album. Although Ed Roland has written lyrics that seem more personal and reflective, the music does not demonstrate that same quality. On previous albums, the listener had a sense of familiarity with the band combined with the freshness of the band's approach; Afterwords just feels derivative. The album is too similar in pacing and style to Youth, and there are too many flashes of trying to regain lost glories from earlier efforts. But maybe that sense of familiarity is actually in the band's favour, as they have mastered the art of the three-and-a-half-minute-long pop song. But, as with previous efforts, Roland reaches out beyond his lyrics with a sense of earnestness and amiability that transcends the album's (and band's) shortcomings. So, despite the fact that I think that this is quite possibly the band's blandest album to date, I still like it. Afterwords might not push its way into my regular rotation, but some of the songs will really grow on me, as they have already begun to after the first listen. Overall, Afterwords is a good album for fans of the band, as it's a fun summertime pop-rock album, but it is not likely to bring in many new fans. It's a nice afterthought to the last couple of years, and it maintains the status quo for the band. The album is kind of like porridge: it's kind of sweet, warm and fuzzy; it reminds you of good memories from the past; and it's nice to have every once in awhile - just not every day.
Posted by Life of Turner No comments:

I suppose that now is as good a time as any to publicly recant my earlier statement about Facebook. After some careful investigation of the site, I found that I could actually do a lot of the things that I wanted to without compromising my personal or professional identity. So now, not only have I joined, but I have spent a fair bit of time developing my presence there, and I am quite happy with what I can do with Facebook. I think it will be a good safe addition to my communication methods, and I am looking forward to using it this year. Furthermore, I find it interesting how it has added another level of formality to e-conversation, and how it has not replaced but instead refined e-mail communication - no longer is it necessary to use e-mail for those silly "organizing details" kind of e-mails, and there is comfort in having the availability of instant messenging without needing the immediacy of direct contact. In short, I approve. So, consider this my eating of my words.
Posted by Life of Turner 1 comment:

Dieter Dengler was an American fighter pilot whose plane was shot down early in the Vietnam War. He was placed in a Vietnamese POW camp, and after years of planning his exit he finally escaped. When he was picked up by the U.S. Air Force, he weighed 86 pounds. Rescue Dawn is his story.

Read the rest of my review here.
Posted by Life of Turner No comments:

So, for those trying to keep up with the Life of Turner, here are the changes of the past week. Camp is done. Ariann and I got engaged, and are planning our wedding. I have a job teaching in Caronport, Saskatchewan, so I'm moving to Moose Jaw this week. And I joined Facebook. What a week.
Posted by Life of Turner 2 comments:

I know this will come as a huge surprise to all of you, but I just took a personality and mutliple intelligences test, and here are the results. Enjoy! 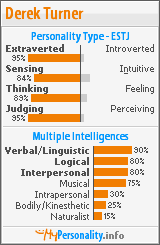 Posted by Life of Turner 2 comments: